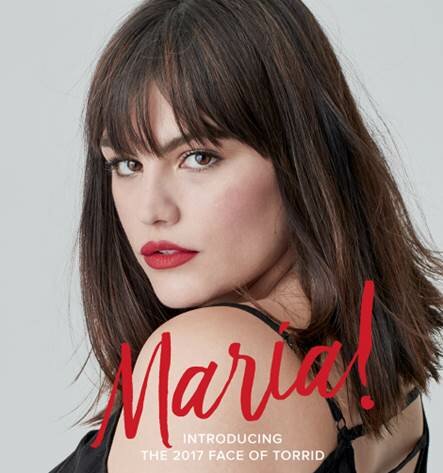 I bet Maria Gimena is one of the happiest people on earth right now. She is the new Torrid Model Search Winner. Maria Gimena a 20 something Uruguayan-born Jersey Girl (WOOT WOOT) is the winner of Torrid‘s 2nd annual nationwide model search. After a 4 city tour and thousands of online submissions, the Torrid team had the amazing task of narrowing down the final four.  From there, there was an exciting twist. Instead of the four finalists going before a panel of Torrid judges, Torrid allowed fans of the brand to pick the new winner. Oh! the power of social media.

Winning the Next Face of Torrid has been such a blessing and what feels like a one-in-a-million opportunity. The fact that I was chosen out of a group of so many beautiful, strong and diverse women is beyond words. I’ve always had an interest in fashion. However, I never viewed myself as a ‘model’ because growing up, there were no role models in the media who looked like me or that I felt I could relate to. Now that the industry is finally changing, I am proud to represent such an amazing brand like Torrid

As part of her new role as the 2017 Face of Torrid, Maria receives a modeling contract and Torrid wardrobe. She will host Torrid store openings and events as a brand ambassador, star in seasonal fashion campaigns, and appear on the brand’s social media channels throughout the year.

We are all really excited to work with Maria because she is such a wonderful girl, sweet and determined and simply beautiful . She comes from a great, supportive family that is so proud of her and she seems to be a natural when it comes to modeling. For me, selfishly, I feel that she really cares about highlighting and showcasing the product she puts on, not just herself. And frankly, she looks great in everything we put on her. It was also amazing traveling to Maria’s hometown and surprising her with the news that she won in front of her friends and family.

I’m super excited to see her some of the upcoming campaigns for Torrid.  Check out the video announcement below! Congratulations Maria, we wish you much success.