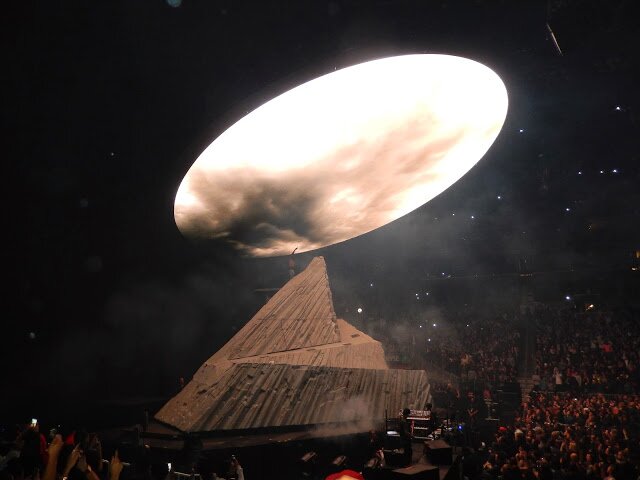 The title should’ve said it all. Last night my cousin got tickets to see Kanye West at the Barclay’s Center in down town Brooklyn. I’m the 1st to say that I’m not totally feeling Kayne right now, but he can put on one HELL of a show. And being this was my 1st major concert, and my 1st time at the Barclay’s I have to say I had an amazing time. Kanye got real with us. He did some of his older hits, but his Yeezus album was front and center.
I don’t know how my cousin did it, but I think we had some great seats. No we weren’t right up on the stage, but we definitely weren’t in the nose bleed seats. He had Kendrick motherf***kin Lamar as his opener. He did his thing as the crowd made their way into the venue.

Yes he has his face covered for majority of the show. Only Kanye lol
He did have a moment vulnerability, talking about his life, the lost of his mother, the media, and everything. Those are the moments when even with him calling himself God, even he realizes that he’s still human. But in true Kanye fashion, he didn’t hesitate to remind the packed 15,000 Barclay’s Stadium, that we shouldn’t listen to the “nay-saysers”, our haters, the instagram trolls, the media…we shouldn’t even listen to him. We need to let our own flashing lights shine.
I can’t lie, his set was amazing. Between the lights, the pyrotechnics, the smoke, and of course the music, it was truly an experience.
Yup he had Jesus on stage lol Right before we all sang Jesus Walks.

I feel like, you can feel how ever you want to feel about Kanye. Yea most of us aren’t feeling him right now, nor is baby-mama/wife to be but truthfully he is a true artist and genius. He makes you think. He makes you uncomfortable, he says thinks that will defy certain feelings. But at the end of the day that’s what a true artist does. And to be honest, I wasn’t as offended as expected to be. Reading some of the blogs, and other write ups, I was expected to be like truly pissed and angry. But I think when you look at it from a creative stand point you’re able to adjust your judgement.

And this is how you end a show lol Looking up and Jesus, and just straight walking off.

Needless to say, I had an awesome time. Kanye made sure you got ALL your moneys worth. And no I’m not angry or up in arms about the religious aspect. I know where I stand with God & and I won’t let this upset me. At the end of the day, it was jumpin! So until next time loves.